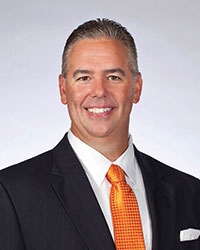 Sean Kouplen serves as Chief Executive Officer at Regent Bank, N.A. and Regent Capital Corporation and has been its Chairman of the Board since January 2016. Mr. Kouplen also serves as Chief Executive Officer and President at Regent Capital Corporation. He served as President and Chief Operating Officer at Grand Bank and also served as its Treasurer. Mr. Kouplen served as Chief Operations Officer of Citizens Security Bank.

He is the Chairman of Onefire Holding Company, a wholly owned business subsidiary of the Mvscogee Creek Nation. He is a Director at Metafund and has been named the Central U.S. Community Banker of the Year by the Independent Community Bankers Association, the Journal Record's Most Admired CEO, and has been named to the Tulsa Business Journal's Top 40 under 40 list. He is also co-author of the book, The Abundance Mentality.

Mr. Kouplen holds a Bachelor’s Degree and a Master’s Degree from Oklahoma State University. He is a devoted husband and father of three children and enjoys a healthy lifestyle through healthy eating and is a Black Belt in Taekwondo.